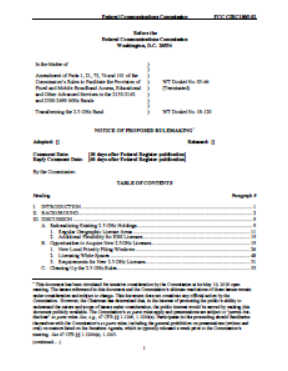 The FCC has released a draft Notice of Proposed Rulemaking (NPRM) in a proceeding titled “Transforming the 2.5 GHz Band” (WT Docket No. 18-120), with the intention of officially initiating the rule making proceeding at its open meeting scheduled for May 10, 2018.  The source FCC document for the NPRM is available here.

The draft NPRM proposes changes to the rules relating to existing Educational Broadband Service (EBS) stations, as well as new rules to govern the licensing of currently vacant EBS spectrum across the country.  A short summary of the proposals (and questions) set forth in the NPRM is below.

If the draft NPRM is adopted, the FCC will solicit comments on the proposals for a thirty-day period beginning when the NPRM is published in the Federal Register.   Reply comments will be due 60 days following publication.  If that schedule holds, comments and reply comments will probably be required in the time frame of July through August, 2018.  Following the filing of comments and reply comments, interested parties will likely try to persuade the FCC on various issues in meetings and other communications over the ensuing months.   It’s not possible to predict when the FCC might ultimately adopt new rules, but it could be any time from later this Fall into next year.

The proposed rules would have very serious and far-reaching effects on existing EBS license holders and on those seeking to obtain new licenses.  Unfortunately, the proposals are not aligned with the Consensus Plan for EBS white space licensing submitted several years ago by NEBSA, CTN, HITN and WCAI.  It will be critical for the EBS community to help shape the FCC’s ultimate decision.

Flexibility for Existing EBS Licensees.   The FCC proposes to permit licensees to sell their EBS licenses, including to commercial entities, to eliminate educational use requirements, and to eliminate restrictions on EBS leasing (including the current 30 year limit on leases and the requirement for review of educational needs that is supposed to take place at the 15, 20 and 25 year point of existing leases).  Obviously, these changes would have significant impact on the educational nature of EBS spectrum.

Filing Window 1 – Existing licensees as of the date of the NPRM (May 10) could apply to extend their GSAs to the borders of counties that they currently cover or intersect, but only where the license GSA already covers a significant portion of the county and where the licensee has a local physical presence in the expansion area.

Filing Window 2 – Rural tribal nations could apply for EBS licenses in rural areas where they have a local presence, with no limit on the number of channels they could seek.  The FCC asks whether these licenses should be awarded on a county-wide or Census Tract basis.

Filing Window 3 – Local educational entities (accredited schools or governmental entities such as school boards that are present in the proposed licensed area) that do not have any EBS licenses could apply for EBS licenses, with no limit on the number of channels they could seek.  The FCC asks whether these licenses should be awarded on a county-wide or Census Tract basis.  If there is more than one application for the same channels in the same area, the FCC proposes to use competitive bidding to award the license.

Auction – Any remaining EBS spectrum would then be made available for commercial use using competitive bidding.  The FCC asks for comments on the appropriate geographic area for such licenses, and the size of the channel blocks to be covered by the licenses (particular channels or groups of channels, or the entire band?).

Requirements for New EBS Licenses.  For new EBS licenses, the FCC proposes that there will be holding periods (between 3 and 7 years) before licensees could sell their licenses, and that leases on these licenses reserve 20% of the capacity of the channels for educational use.  The FCC also proposes “more robust” performance requirements for these licenses, including an interim requirement of 50% coverage of the GSA population and final coverage of 80% of GSA population.  The FCC also proposes to apply the renewal rules it adopted for other wireless licenses in the recent “renewal harmonization” proceeding.